The Tale of Miss Hissy and Her Three Little Kittens 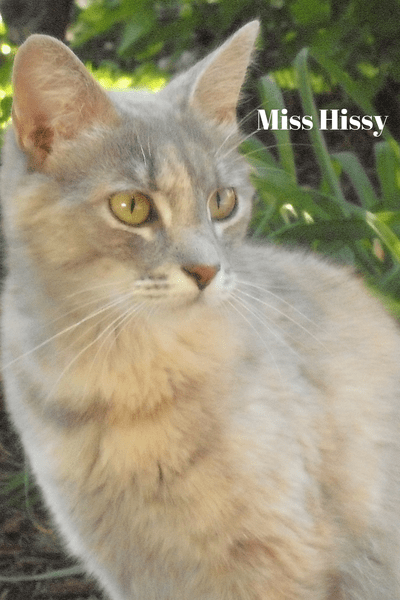 So TS Eliot, one of the most famous and most discussed poets of the 20th Century, is a big favorite of mine. He’s challenging to read, for the most part, (at least for me) and keeps English majors on their toes (at least I’m tip-toe). But not all his works are as dense and deep as “The Wasteland” or “Four Quartets”. He is perhaps best known outside scholarly circles for a small volume called Old Possum’s Book of Practical Cats. It’s the set of poems on which the musical CATS, is loosely based. Elliot’s ode to felines is a sort of whimsical identification book for all sorts of cats. And those of us who are cat owners, really get Elliot, who really got cats.

And while his complete poems and plays sit ever-ready for a read in my living room, I never dreamed I’d add my own chapter to Old Possum’s Book…but I did: The Tale of Miss Hissy, Angel, Panama Red and Mouse.

Don and I have lived in our house in Edwardsville for 20 years this past June. We have always felt so at home here. We have great neighbors, dear friends, woodlands and quaint shops within walking distance. From nearly our first year on Grand Ave. we’ve also had “house guests”. The furry kind that live a life apart from us but intersect with our lives on a fairly regular basis—a pattern known as breakfast and dinner, for the most part.

I’m talking about the kitties who have come and gone like so many practical cats in a TS Eliot poem. They don’t belong to us, and yet, they are part of the household. Eventually, they will disappear, and I don’t dwell on that very often because my human heart has a hard time separating my beloved indoor pets (Bear, Ocean and Owel) from our feral friends.

And I’ve said for years that one day we will end up dealing with kittens. And we did, beginning this cold April. I turned on the porch light at four a.m. (yes, morning person) to see how many bowls of food I needed, only to discover that one of my regulars, which I have named Miss Hissy for perhaps obvious reasons, appeared on the front porch with four furry balls of unlimited energy. Not yet weaned, they had followed her from their wild home to our dining porch. 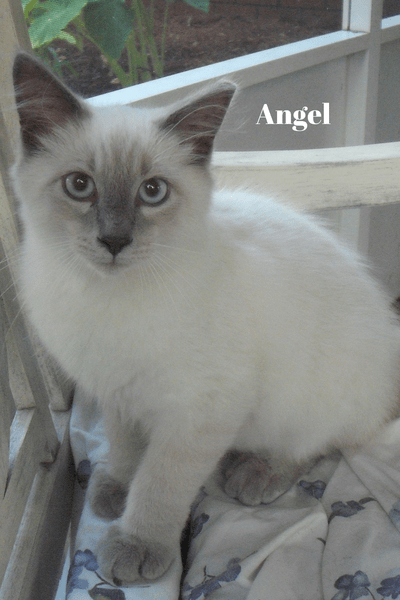 Once we got over the infinite cuteness, we began to feel the reality of the situation sink in as daylight grew and the traffic on our street increased with alarming speed. My first thought was to move everyone around back, and that was fairly simple: we played follow the food. Next we opened our screened-in porch and made comfy beds. Then we sat down and worried. This last part took the longest—maybe two months.

When we lost one kitten to the traffic in the street, we knew we were on borrowed time and that in our luxurious worrying (and playing with the kittens that are adorable beyond what should be legal) we’d grown a little too fond of Angel, Panama Red and Mouse. Yes. Named them…a very bad sign. Not to mention the degree of stress our own cats were experiencing: Bear, Owel and Ocean were wondering if these new residents were going to “come in.” And they were not amused. They kept steady, constant watch through the windows to make sure the walls of their fortress were not breached. 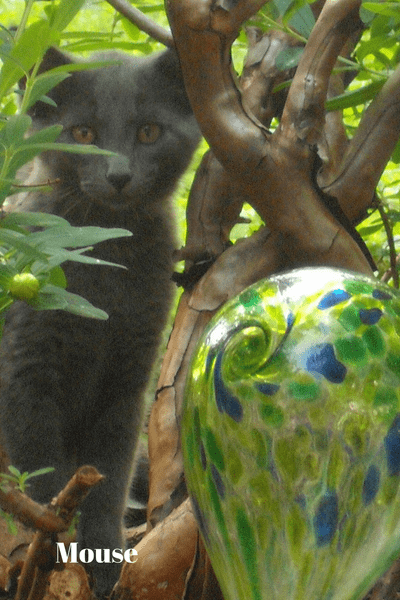 So after some research and more worrying (which is only praying for what you don’t want), we decided to call Stray Haven Rescue, a nonprofit dedicated to the health, wellbeing and welfare of all cats—domestic, stray, abandoned and feral. It was the right move. Through email, we met two amazing women, Christine and Carrie. They guided us in getting appointments set up to have the Miss Hissy and her offspring spayed and neutered, vaccinated, and thoroughly checked out. Carrie brought us traps and instructed us in how to use them, when to set them and how to keep the cats calm (for the most part) until their surgery.

One of the things we suspected but did not know for sure was that Miss Hissy had already managed to “cat around” and had gotten herself in the family way once again. I feared for her wellbeing because part of the deal is that she wouldn’t be pregnant when she came back home. I understood completely because when I did my research I learned there were about 400 kittens in local shelters this spring. Still I was worried about so much surgery for such a tiny cat.

Without ever knowing it or asking for it, Don and I had become caregivers for “community cats,” cats who through no fault of their own ended up fending for themselves and trying to survive in an oftentimes cruel, uncaring human world. The same can be true for dogs, BTW. Humans get to decide which animals to label pets—even spoiling them to excess—and which are labeled nuisances. But the truth is they are one in the same. The only difference is luck and fate and human whim. 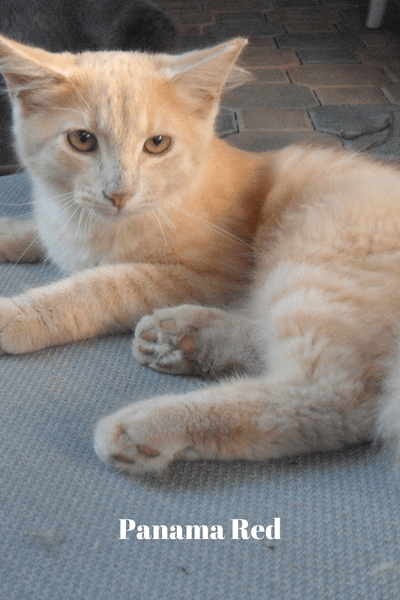 In the end, everything did turn out sort of happily-ever-after. We let our friends and neighbors know our plans so that they would not worry when the kittens disappeared. Then, my dear friend Jane stepped up to offer her farm to the kittens. Jane and her husband are farmers in Columbia, IL and have already successfully re-homed one feral cat. What difference would three more make? In truth this gesture was incredibly generous and kind. The kittens have found a new home, new names and a new world to explore together.

Miss Hissy remains ours. She comes for breakfast and dinner nearly every day right on schedule, and, yes, I am frantic when she doesn’t show. But that’s how it goes because she has her home–somewhere–and our encounters with her are “visits”.

If there are community cats where you live, you can find support at Stray Haven and through a national organization called Alley Cat Allies, to which Don and I belong. According to Alley Cats Allies, all across the world, people are caring for community cats. Outdoor cats have been sharing neighborhoods with humans in America nearly since the pilgrims landed. So this isn’t a new neighbor, but the neighborhood has considerably changed in ways that would benefit if humans stepped up to help their feral feline companions. Here are just a couple ideas from Alley Cat Allies:

Be brave. Like human overpopulation, cat overpopulation can threaten resources, the environment and the health of a community. If you are brave, consider volunteering to conduct a Trap-Neuter-Return project in your area. This step is a big one—we know—but it will increase community-wide health and survival. Most importantly, it will stop overpopulation, disease and heartache.

Be kind. Offer food and water to community cats. We put the dishes on an overturned large baking dish and sprinkle diatomaceous earth around the base to help keep down insects. We try to keep the cats on a regular feeding schedule, so there is no food sitting around to attract other critters, who shouldn’t eat it anyway.

Create some shelter. When the weather gets cold, we have old pet carriers that we wrap in sleeping bags on our front porch, away from wind and wet weather. The cats figure this out pretty fast. Alley Cats has more ideas on this, too.

Be responsible. Alley Cat Allies can help you keep track of your community cats, particularly if you participate in getting them fixed and vaccinated. Many times, including our experience with Stray Haven, funds are available to help cover these costs. You will not be alone.

Be a cat poet. Well, maybe you and I will never be a TS Eliot, but we can be community cat ambassadors within our neighborhoods. Cats are not lazy, as some might think. Outdoor cats kill mice, rats and moles, which eliminates the need for poisons that also kill birds of prey and other wildlife that have the unfortunate luck to eat poisoned prey. And while some might argue that community cats also get their share of songbirds and bunnies, this is, in my humble opinion, human-inspired prejudice. Mice and moles are no less living creatures than songbirds and baby bunnies; we just attribute certain values to some creatures that we do not to others. Nature is what it is.

So, this was our summer adventure. I guess that’s really what I’m doing here—giving you that “What I Did Over Summer Vacation” essay. It took up way more time, energy and emotion than I could ever have imagined. But in the end, these little creatures and this experience gave us so much more love than we ever expended in time or money or worry. And Don and I are forever grateful to Miss Hissy, Angel, Panama Red and Mouse for being the thing we didn’t know we wanted but definitely needed.

And my opinion now is that

You should need no interpreter

To understand their character.

You now have learned enough to see