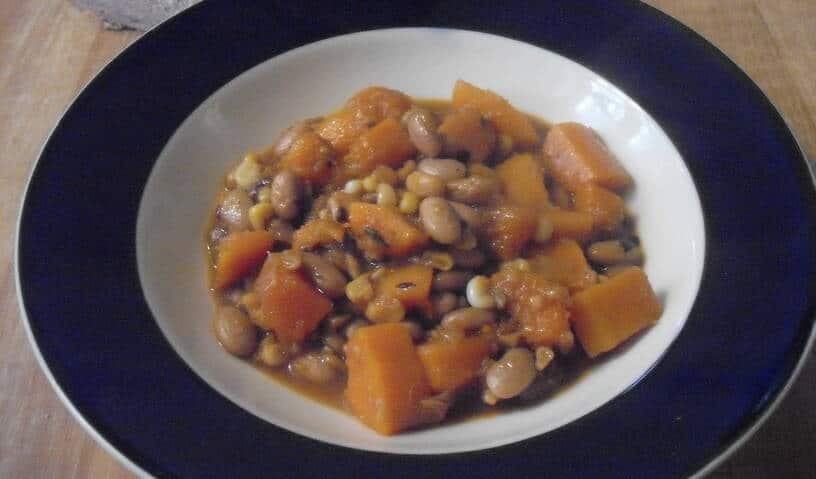 Once January rolls around, I’m on a mission to organize the food stored in the basement, empty out our deep freeze and create as many comfort foods from last year’s harvest as possible. This annual exercise has turned out some spectacular dishes—soups, stews and casseroles, as well as pies and breads. It is also an important ritual for me—an honoring of the continual cycle of eating local, in rhythm with the seasons and the stages of planting, tending, harvesting, preserving and enjoying that guide my kitchen all year.

We can learn a lot from the cycles of the seasons and the planning of gardens. Take for example the main ingredients in this hearty vegan riff on a traditional French classic, the cassoulet: squash, corn and beans, known to the Iroquois and Seneca as the Three Sisters, star in a comfy stovetop casserole that pays homage not only to my own French heritage but also to the wisdom and Earth-knowledge of the indigenous people of North America.

The Legend of the Three Sisters says that there were three sisters who lived in a field, very different from each other, yet thoroughly devoted to and equally dependent on one another, each sister giving and taking equally from the other two. Because of their cooperation, they created a perfect system, where each could grow to meet her own potential, healthy, safe and strong.

As with all legends, there is a foundation of truth and wisdom at its root (pun intended). The corn stalk sister creates a structure to support the bean sister as she grows; the bean sister sends valuable nitrogen into the soil, providing sustenance for her two other sisters; and the squash sister sends out multiple sticky vines that protect everyone from greedy critters and blanket the soil in a moisture-saving groundcover. This legend is one way of understanding regenerative agriculture, something we talk about a lot on the blog.

Regenerative agriculture is kin to organic farming, but not synonymous. It is a system of farming where plants and animals work together for the betterment of the whole, lessening any need for chemicals and extensive soil disruption. Remember, Blaine Bilyeau in Farm Like a Girl? Blaine’s heritage Berkshire hog farm was an example of regenerative agriculture. Unfortunately, Papa’s Pasture has ceased production, as Blaine has decided to explore new pastures, but her method of herding her Berkshire hogs from spot to spot around the farm, allowing the hogs to root out invasive plants and leave their trampled waste behind created the system for other plants to grow and thrive—for instance original prairie and pollinator fields.

Jackie Mills, owner of The Family Garden, is another great example of a regenerative farmer. Every animal and plant on her farm contributes to the growth, health and wealth of everything else on the farm.

This idea of a self-supporting system that sustains both the land and a healthy human diet goes back farther than we have time to consider here—The Legend of the Three Sisters was around long before a pilgrim set foot on the Americas. So I invite you to read about the Legend of the Three Sisters, learn about the Iroquois white Corn Project—a mission to save the heirloom white corn seed, which is a major part of their heritage and an important part of Indigenous People’s diet–and even support the Project, if you so choose. But for now, let’s get cooking and celebrate those three sisters properly… in a pot…with a slight French accent!

My version of this Three Sisters-inspired cassoulet uses fresh butternut squash, dried pinto beans, the last of my fall shallots and the last bag of frozen corn kernels from July 2020. But if you don’t have all my ingredients, no worries. You can use some substitutes to create your own version. For instance, you can substitute the four cups of chopped butternut for cubed pumpkin that has been par-roasted, peeled and cut into cubes. In fact, it’s likely the Iroquois used a different version of squash entirely. But legends have a way of circling around like the seasons, shifting as needed for each new cycle and each new cook, too. Onions work just as well as shallots and frozen bell pepper could replace the corn. I also think that, had I had some in the fridge, fresh fennel and fennel fronds would have been lovely. I made do with an exquisite fennel powder, which was just fine.

The main difference between using butternut over pre-roasted pumpkin will be the addition of extra liquid. Pumpkin creates a lot of liquid as it cooks down; not so with butternut squash. So if you go with the pumpkin (which will also create a bit of extra work), make a note that it gets syrupy and rich and that, in turn, enhances flavor, so a different taste—just as good, but just different. Be brave. You can see my method for pre-roasting pumpkin wedges in my previous blog post: Pistachio-Encrusted Pumpkin Wedges. But for now…..

Classic French Cassoulet–or how my Granny might have done things

So just how different is this from the rustic French classic? Well, in some ways very different, but in theory, not much. A classic French cassoulet consists of white beans that are cooked with meat. You see, the French farm wife makes her cassoulet from leftovers—the meat from the week’s cooking, especially game such as duck and rabbit. To this she adds the beans, and any vegetables and stock on hand. Covered, it cooks slowly all day to enhance all the flavors and marry them together. Frugal, green and delicious cooking. Exactly what we have been after here….so if you have leftover meat, white beans instead of pinto and a frozen chicken stock—GO FOR IT! Or just create your own cassoulet with what’s on hand. Be brave! And let us know how it turns out.

It is pretty clear now that a plant-based diet, even it it does include local meat from regenerative ag farms, is going to help us fight climate change. So if one of your 2021 personal promises is to make yourself and the planet healhier, adding more vegan and vegetarian dishes into your diet is a great start. Be sure to check out some Green Gal Favorites like Vegan Chili with Quinoa, French Country Lentil Soup and Winter Wheat Berry Bake.