Time for a Little Sauce-ery in the Green Gal Kitchen 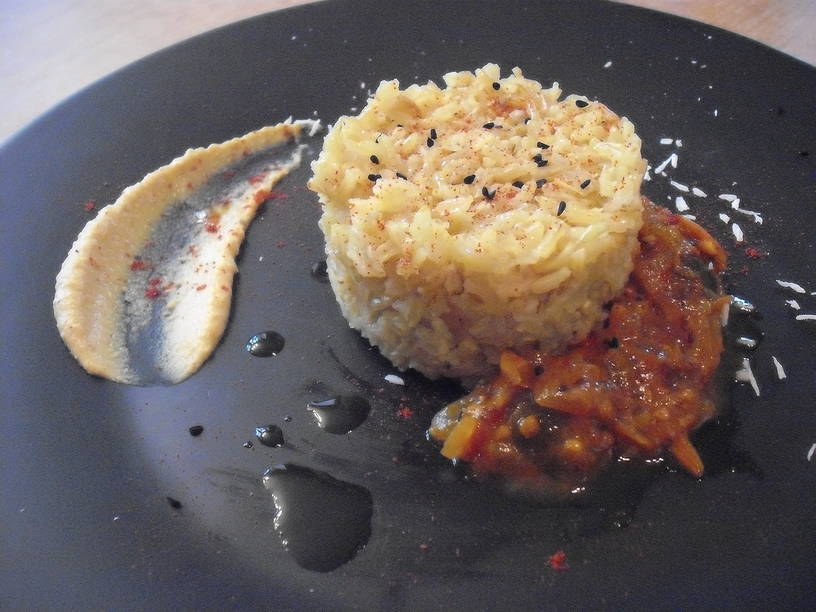 I don’t know about you, but by the end of winter, I’m struggling to be creative in the kitchen. My most industrious activity come March is using up whatever is left in the freezer, not matter how mundane. And if you recall (and I’m sure you do), I have quite a bit more freezer space this year because of that generous birthday gift from my friends, so there’s a lot more food to use up. Ok, ok, that’s not my point here, so moving on….

My point is that sometimes it takes a little culinary magic to keep mealtime exciting at the end of winter. So I turn to sauce-ery. In this case, I set about creating two sauces—both of which are vegan and gluten free–that not only work well on their own but also pair very nicely with each other. One is created from red lentils and coconut milk and the other is a combo of tomatoes, garlic, onions and peppers. Both are super easy to make, and I used them to create four different dishes—all with lots of flair but not a lot of fuss.

I chose red lentils for my “Red Lentil Curry Cream” because red lentils are very different from their green and brown cousins; they don’t need a presoak and take almost no time to cook. In 10 to 15 minutes you can have chewy lentils; in 15 to 20 minutes you can have mushy lentils that puree into a creamy paste—exactly what I was after here. However, red lentils are still high in protein, so they make a wonderful addition to any vegetarian or vegan diet. Add in some high-quality curry powder and a can of organic coconut milk and you’ve got an amazing cream sauce.

I began my “Indian Red Sauce” by clearing a little space in the freezer: one bag of tomatoes and one large red pepper. From there I added some of my favorite Indian spices—coriander, cumin and turmeric. Just a half-hour in the skillet and it was good to go. And then… you knew there’s more to this, right? So read through the recipes below and then I’ll share my four dishes that help make the end of winter a bit more magical.

Yield: each recipe yields about two cups of sauce--a little more for the curry cream, a little less for the Indian Red 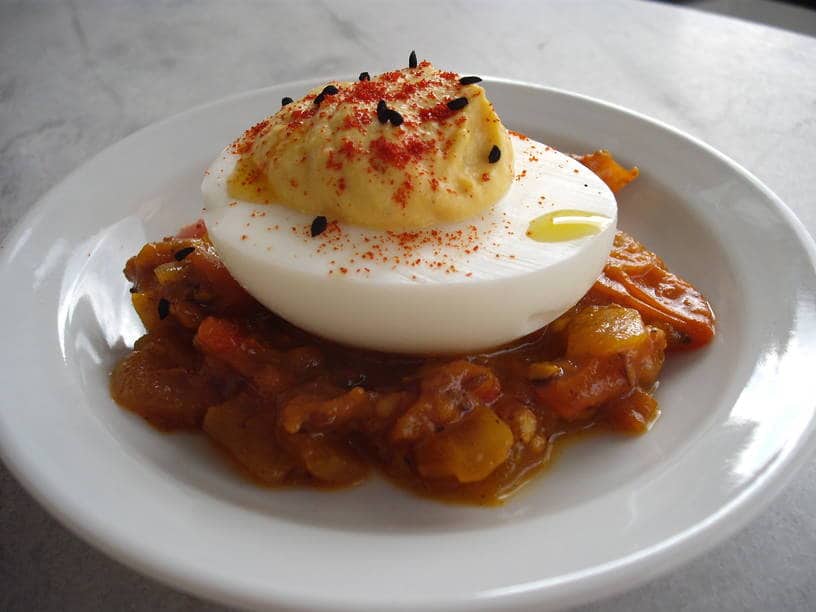 For the Red Lentil Curry Cream
For the Indian Red Sauce

The prep and cook times reflect the time that should be devoted to each sauce. They come together easily and fairly quickly. 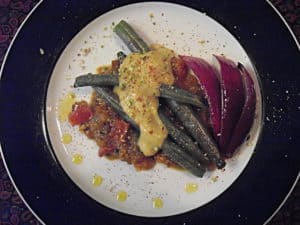 Once I had both my sauces created, I decided to fancy-up some of my standard winter dishes, beginning with plain old fresh-frozen green beans (about a half-pound bag) that I tossed with some olive oil, dark balsamic vinegar and coarse sea salt and roasted in a 450-degree oven alongside a couple quartered red onions for about 40 minutes—till they were soft and had begun to caramelize. I stirred them halfway through.

To plate the beans and onions, I nestled them atop a few spoonfuls of the heated Indian Red Sauce and topped them with warmed Red Lentil Curry Cream. For extra flair, I sprinkled the whole dish with some ground raw pistachios, a pinch of smoked paprika and a slight drizzle of Baklouti oil (What’s that, you ask. I’ll go over this “star ingredients” in a bit.). Needless-to-say, this was a dish fit for company. Serves four as a side dish.

This is perhaps the dish of which I am most proud. Using both the sauces, I turned common-place deviled eggs into a super starter plate. I pooled room-temperature Indian Red Sauce on a tiny white plate. Saucers work great because they hold the sauce in place. I took four large hard-cooked, chilled eggs and combined their yolks with four tablespoons of my Red Lentil Curry Cream and two tablespoons of plain Greek yogurt. Whipped this a bit and piped it back into the whites using a snipped-end baggie. Then there was a pinch of smoked paprika and another pinch of something else exotic—charnushka. Charnushka are tiny black seeds from India that taste slightly spicy and are a main ingredient in garam masala. You will find charnushka at Penzeys and other gourmet food stores. Very nice. A final drizzle of that Baklouti oil (on which I have become permanently hooked!), and that was that. Serves four, two egg halves per person.

Over-the-Top Coconut Rice (my featured photo at the top)

My go-to coconut rice is pretty simple—a cup of long-grain brown rice, two tablespoons coconut oil, a dash of turmeric, a Ceylon cinnamon stick (about half-inch), two to three tablespoons raw shredded coconut and water. Using a heavy pan with a glass lid, toast your rice in the coconut oil on medium-high heat for about four to five minutes—you’ll start to smell it toast and you know all the rice grains are thoroughly coated with oil. At that point stir in the coconut, turmeric and cinnamon stick–maybe a pinch of coarse sea salt. Now carefully add the two cups of water and bring it up to a rolling boil as quickly as you can. Put on the lid and reduce to a low simmer…and LEAVE IT ALONE! In about 25 minutes you’ll have perfect rice. Remove the cinnamon stick before serving.

So to take this simple rice over the top, I used my two sauces, both a room temperature, along with a sprinkle of shredded coconut and charnushka and a drizzle of Baklouti. Serves four to six, and make sure you pass extra sauce around the table. Trust me.

Ok, now we are ridiculously simple yet yummy. The yolk mixture for my deviled eggs produced about double what I needed for the starter dish. So Don and I had the rest on whole wheat toast for a protein-powered breakfast the next day. And yes, Don had his with maple-glazed bacon crumbled on top. Serves two to four; makes four slices of toast total.

My Baklouti Oil was a Christmas gift from my friend Mary Lynn. She sent it from her new hometown in New Hampshire, also home to Monadnock Oil & Vinegar Company. Tunisian Baklouti peppers are rare and fire-hot. Monadnock’s Baklouti Oil is made by combining one pound of organic olives with 1.6 pounds of fresh whole Baklouti peppers, using Monadnock’s special infusing process. Oh my. If you can’t find this, use your own favorite chili-infused oil. But give it a try either way.

So let’s end winter with a bang, not a ho-hum. We just need to employ a little sauce-ery. Magic wands and whisks poised?