Walking on the Wild Side with Tiny Tom Turkey 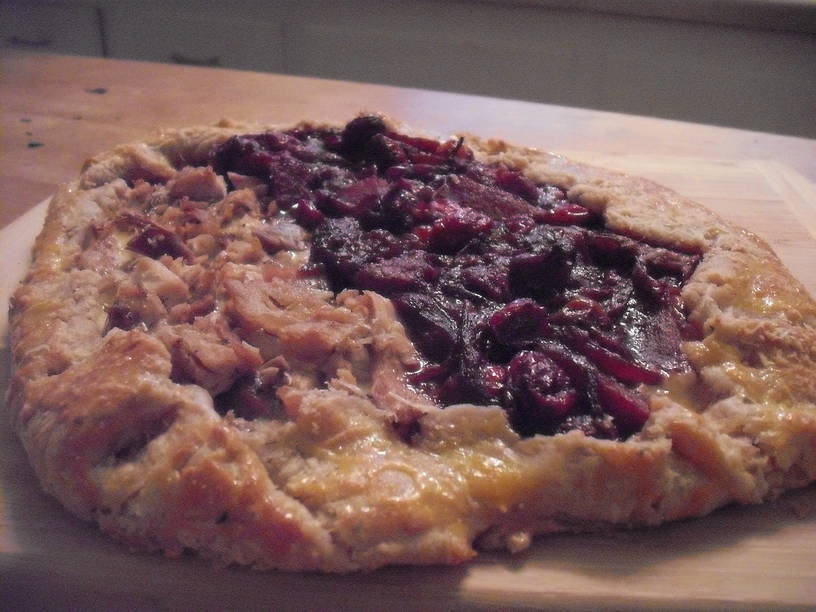 Well, yes, it HAS been a while. I got a little sidetracked this week when I got THE CALL. And THE WORD was persimmons! My neighbor, friend, farmer and expert forager Travis announced on Tuesday that the persimmons were ready, and he knew just where to find them. How could a green gal refuse?

So all of Wednesday was devoted to scouting out the persimmon trees (We began a 5:30 a.m.); harvesting them via a large stick hurled high in the air (Travis did this, but you probably guessed that.) and then scavenging the ground for the bounty (Thank goodness for that headlamp on Travis’ hat!), and finally—for what took literally hours—washing, seeding and pureeing the ripe, sweet, sunset-colored flesh of the persimmons (my job).

So stay tuned for an old-fashioned persimmon holiday treat. For now, though, let me just say this: Sometimes you get just what you asked for and, still, you are not prepared. For instance, my conversation with Shawn Mullens of MOB Farms at the market back in October went like this:

Me: Shawn, the turkey last year was a big hit—but maybe too big. Remember it was 24 pounds?! Remember that I’m a vegetarian and Don is just one little guy?! Is there a way to request something smaller? Maybe quite a bit smaller?

Shawn: (smiling and shaking his head in the affirmative) I remember. What about a wild turkey this year? We raised some, and they are much smaller than the domestic turkeys, like the one you had last year. A little gamier in taste, maybe, but definitely smaller.

Me: Ok, let’s go with the wild turkey. Sign me up!

I walked away minus my deposit thinking “small…. right….probably 19-20 pounds if it’s an ounce.” And I began to prepare:

I logged in the big disposable roasting pan on my shopping list because I knew my roasting rack would be too small—I’d been through this before, you see.

I made sure we’d have plenty of money in the checking account to write the final check on Nov. 21 because last year I shelled out $80 in addition to my upfront deposit. (I’m not complaining about this, by the way; last year’s turkey is still talked about as ‘one of the best ever.’ I’m just clarifying the situation as it unfolded.)

I cleared the entire bottom shelf of the refrigerator so the turkey could slide right in once we got it home.

And, finally, I began lining up the recipes for leftover dishes so that the roasted bird could be divided and organized before storing. There’d be soup, of course, and perhaps a pot pie this year. Some meat could be frozen for a quick weeknight meal for Don and, like last year, those big drumsticks would be removed prior to roasting for a pre-Thanksgiving special dinner in 2017. The rest I’d deal with after the holiday.

When I stepped up to the back of the truck on the evening of the 21st, I pulled out my checkbook and handed Laura Blumenstock my receipt. “Notice it does say as small as possible” I said to her with a smile.

I looked at my Thanksgiving turkey and realized my roasting rack would be just fine. The legs would be browning on the bird and, if we wanted soup, there’d be no frozen easy-weeknight-meal for Don. Tiny Tom (as we came to call him) was the size of an overgrown hen. Scratch that pot pie.

But every twist and turn in the best laid culinary plans presents opportunities. If this was the smallest turkey I’d ever roasted, what was the advantage? Brining. Brining is the secret to moist, succulent meat, but the process would have been out of the question with last year’s turkey—no stockpot in my kitchen could have held it and the two-plus gallons of water needed to submerge it. Who am I kidding? If I did have a stock pot big enough, no one in the house could have lifted it to get it back to the frig. However, this year, Tiny Tom presented no such problem… he only offered the opportunity to try something new. 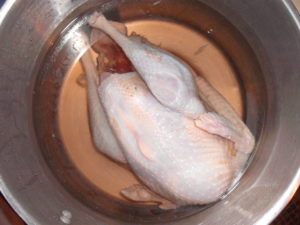 It is critical when brining to have the exact ratio of water to salt and to completely submerge your meat.

And it worked. I brined Tom for about six hours prior to putting him in the oven in a solution of two and a half gallons water with two and a quarter cups of kosher salt. He actually bobbed up to the top a little—so tiny—so I weighted him down with a dinner plate to make sure he stayed submerged.

Once he was out of the brine, rinsed, patted dry and ready for the oven, I remembered Shawn’s comment about gamey taste, so I decided to tame some of Tom’s wilder side by stuffing him with a big sliced orange, yellow onion quarters, black peppercorns and a sachet of fresh thyme, bay and sage—just a little subtle flavor and extra acidity that would infuse his meat. Then I buttered and oiled his backside and put him in a 325-degree oven for about three hours. Half way through, we flipped him for a perfectly cooked, juicy breast. 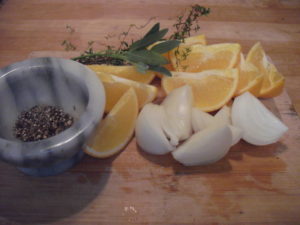 This stuffing was just right for our little bird. Not a hint of gaminess and a lovely citrus smell in the kitchen. 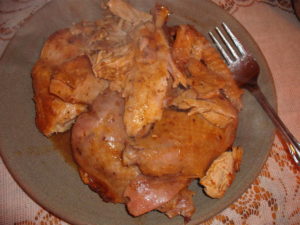 So there he was, all in one piece, all on the table. He was full of flavor and gobbled up by the meat lovers. There were leftovers, but only a small supply. And, you know, I was kinda sad. I had grown really fond of Tom—that little but mighty tasty turkey.

And as I packed away his scrawny carcass in the frig for stock, I knew I just had to come up with some “ultimate leftover dish” to pay him his due. Here’s what I did….

Not only does my Roasted Turkey and Cranberry Sauce Galette use up the leftover turkey, it salvages the leftover cranberry sauce, bits of cheese from the appetizer board and (for the vegetarian version) extra chard, spinach or kale that didn’t make it into the holiday salad bowl.

Perhaps you recall my post on sweet and savory rustic tarts? I’ve never found a better crust recipe than this one, whether I’m preparing dinner or dessert. And, maybe you remember the amazing cranberry sauce recipe that my friend Debbie Ward of Silver Tablet Marketing shared with me last Christmas. And even if neither of these recipes rings a bell, I think you’ll like this left-over but never-to-be-forgotten dish.

Any roasted turkey pieces (or chicken or ham for that matter) will do—I used a mix of light and dark boneless meat with some of the gravy still clinging. And, any cooked cranberry sauce should work, too. However, cranberry relish (uncooked) should not be used and canned cranberry sauce that retains the shape of the can it came out of… well… I will not even comment. Take a look at mine from last year to see if your recipe is similar. If it is, it should work fine. Two of my leftover cheeses were from Marcoot Creamery—Havarti and a Ewe’s Special. I also had leftover grated Parmigiano Reggiano. So use what you have; even a spoonful or two of that cream cheese you didn’t need for the cheesecake will work. Get those creative juices flowing.

Serving Size: a quarter of the tart

For the crust:
For the filling:

Note that the prep time does not include the time it will take to chill the dough, which takes a minimum of one hour.

I felt a lot better once Tiny Tom had a spectacular encore. He really was the star of the show. I send my thanks to Laura and Shawn for taking such good care of him over the past year. Maybe next year I’ll buy two wild turkeys and put one away for Christmas in my new… oh, yeah, I wasn’t going to mention that freezer any more, was I? Gratitude is, thankfully, a hard habit to break.